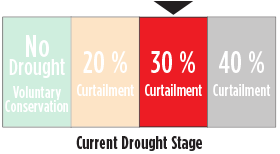 Western Hays County, the HTGCD Board of Directors signed Board ORDER 168, the return of Drought Stage Critical at its April 16th Board meeting. The drought conditions were met on March 26th and announced the same day to all of the District’s permit holders. Drought trigger conditions met the criteria of 30 consecutive days of flow below stage alarm for both the Pedernales and Blanco Rivers. These river triggers are monitored by the United States Geological Survey (USGS) who collect and distribute data using satellite technology. Drought condition data can be viewed on the District’s website www.haysgroundwater.com under Quick Links / Drought Management.

The District currently works with 57 permit holders within the HTGCD’s boundaries. During declared drought conditions, permit holders reduce their production according to their individual curtailments charts. These charts contain production target amounts for each drought stage and corresponding month. All permit holders are required to begin reducing their production to drought stage critical target amounts starting on May 1, 2014. The March 26th announcement allowed permit holders time to reach out to their end-users publicizing the May 1st drought cutback curtailments. Please contact your local water supplier with questions concerning water restrictions and cutbacks in your area.

This summer will be another hot season for our area, so we ask that all residents of western Hays County continue to help the Trinity Aquifer by reducing their personal groundwater usage. If we do not receive enough rain, drought conditions may worsen to stage, Emergency, further reducing production limits for permittees only.

If you are currently using groundwater for your business, in any fashion other than agricultural, you are required to have an operating permit with the District. Operating permit applications can be completed on the District’s website www.haysgroundwater.com under Forms.